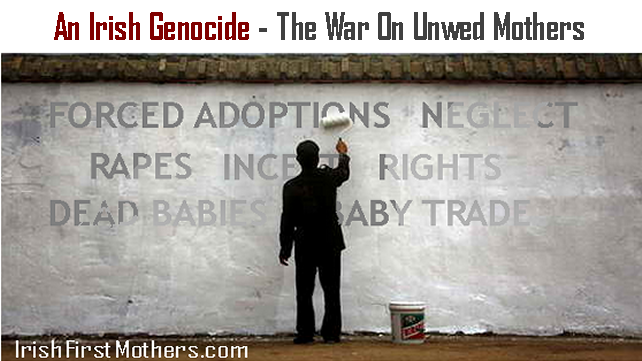 5th March, 2017 - Irish First Mothers has today written to the Irish Attorney General seeking to bring prosecutions under the Irish Genocide Act of 1973 in respect of religiously motivated grievous injuries which we suffered.

We claim the protection of Article 2 of the Convention on the Prevention and Punishment of the Crime of Genocide adopted by the U. N. General Assembly  – and we demand justice under the provisions of Ireland's 1973 enactment of that Convention.

The Attorney General could pursue prosecutions for failure to prevent genocide, for conspiracy, for incitement and for the crime of genocide itself. But we have identified no culpable parties and we leave such matters to the judgement of the Attorney General's office.

Full Text outlining the basis of our genocide claim is below 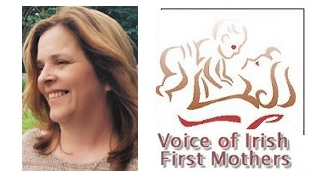 Request for Consideration of Prosecutions
Under Genocide Act of 1973

I write publicly in a personal capacity and representing views from a group of over sixty women formerly resident in Ireland's “Mother and Baby Homes”.

We seek that your office bring prosecutions under the Irish Genocide Act of 1973 in respect of religiously motivated grievous injuries which we suffered.

Specifically, we claim the protection of Article 2 of the Convention on the Prevention and Punishment of the Crime of Genocide adopted by the U. N. General Assembly on 9 December 1948 – and we demand justice under the provisions of Ireland's 1973 enactment of that Convention.

We quote from Section 2 hereunder:

“genocide means any of the following acts committed with intent to destroy, in whole or in part, a national, ethnical, racial or religious group”

With respect to genocide, it is the religious mindset of the perpetrator (not the victim) which is pertinent. We assert that the perpetrators were malignly motivated by their own Catholic idealogical characterization of us as a religiously defined group: a caste of so-called “fallen women”.

Irish society has a historic, deep Catholic veneration of the “virgin mother” as a deity figure. Thus us unmarried mothers were automatically deemed offensively faithless; viewed culturally by perpetrators as bereft of rights.

We assert that their intent was to destroy us as a religious group, as a cohort -by every and all social and quasi-legal available means.

"Single mothers are fallen women and grave sinners, whose children are the product of wickedness". (1952, Father Cecil Barrett, Head of the Catholic Social Welfare Bureau)

Consequent on that genocidal intent we cite these injuries per Article 2:

Genocide Article 2 (b): Causing serious bodily or mental harm to members of the group.

One signature of our treatment was that we were concentrated as a religiously-defined group in one place of effective social detention. Typically we were sequestered in “Unmarried Mothers Homes” which were under the control of religious persons who were also agents of the State.

Polish Jewish lawyer Raphael Lemkin who coined the term "genocide" defined it as:
"a coordinated plan of different actions aiming at the destruction of essential foundations of the life of national groups, with the aim of annihilating the groups themselves."

We suffered under such a plan, with the depth and scale of its inhumanity slowly declining in intensity down the decades until the last such place of social detention closed in the mid-1990's.

Genocide Article 2 (e): Forcibly transferring children of the group to another group.

The second signature of our treatment was that the vast majority of us were dragooned into transferring our children to another group. The reason for the taking of our children was religious (our unfitness) and the recipients of our infants were also religiously defined: “good” Catholics, mostly.

This quote sums up administrative and legal attitude to our rights:

"The foster mother seems to be a devout Catholic. The mother is a lapsed Catholic. She is not a fit person to be granted custody". (1946, High Court dismissal by Mr. Justice Gavan Duffy of Miss Bridget Noonan's application for the return of her child)

Following the 1952 Adoption Act, this transfer of children was enabled preponderantly by quasi-legal adoptions which relied on consents which were betimes forged, incompetent, encumbered, uninformed and which comprised a sanctioned mass fraud upon the adoption courts.

We were sequestered and shamed; rendered dependant and intimidated within the walls of our “concentration camps”. Some were deliberately depersonalised by being forced to use pseudonyms. Thus our personal agency was deeply impaired -in many cases for decades thereafter.

By sense of agency we mean we lost our feeling of being a worthwhile member of our society –with inalienable rights to happiness, to due process, to personal fulfilment. Lacking adequate agency, we were involuntarily rendered incompetent to offer consent subsequently.

Furthermore the medical effect of these shocks –ending in the horrific loss of our infants- triggered complex mental trauma which left us suffering in various stages of Post Traumatic Stress Disorder. Some mothers describe signing consents as if in a dream, others can barely recall the event due to self-protective memory loss. Most consents were thus a legal farce.

Even had we sufficient agency and mental competence, real consent would have required for example, that our legal adviser would be paid by us, would fairly determine agency and competence, would banish other adults while discussing our legal choices to ensure we were not encumbered by duress, would advise without bias. In the main, such diligence was but a fantasy.

Another quote indicates administrative and legal attitude to our rights:

"I think that we are all agreed that the consensus opinion in our society is to the effect that adoption is better for the illegitimate baby than to be cared for by its mother".
(1974, Paddy Cooney, Minister for Justice.
Speech at First Irish Adoption Workers Conference)

What has prompted us to bring these matters to your attention is recent official statements in respect of mass graves of infants in Tuam, Co Galway.

As victims of systematic human rights abuses, the appalling vista of potential mass scale irregular deaths within institutions whose ambience and environs we shall never forget, has crystallized in our understanding a genocidal context to our treatment.

There is already in the public domain much evidence of a genocidal context, in academic studies, in Inquiries or in law cases, etc.. But no doubt your office would legitimately defer adjudicating until informed by the final report of the Commission of Investigation into Mother and Baby Homes.

We may supplement this communication with focused and referenced legal argument which fleshes out the issues we raised above in informal terms. But for now, as an appropriate officer of government in respect of genocide prosecutions, we commend these issues to you for your consideration.

COMMUNICATED BY EMAIL TO AG OFFICE AND BY REGISTERED MAIL