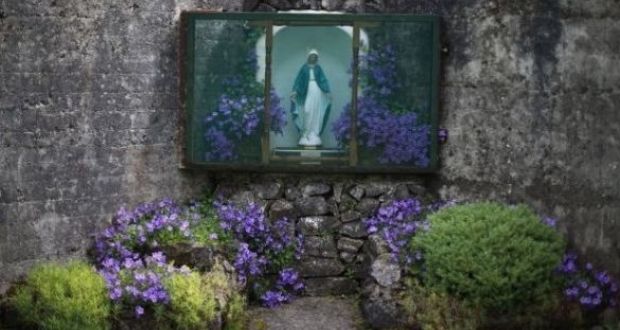 The site of a mass grave for children who died in the mother and baby home in Tuam, Co Galway. Photograph: Niall Carson/PA
A group representing women coerced during pregnancy has stopped co-operating with the Mothers and Baby Homes Commission of Investigation over concerns about how it is being run.
The Irish First Mothers group is seeking clarity from the State on whether testimony given to the commission will be sealed. It is fearful the confidential nature of the commission may mean victim accounts will never be aired publicly.
The group is concerned the evidence may be disbarred from ever contributing to criminal inquiries that may follow the recent revelations about the Tuam mother and baby home.
Irish First Mothers founder Kathy McMahon said the revelations about Tuam had changed the parameters of public debate about mother and baby homes.
Earlier this month the commission said “significant quantities” of human remains found at a home in Tuam run by the Bon Secours order were those of infants.
Ms McMahon said her group had concerns about the commission before its statement on Tuam. But since that statement the possibility of a criminal investigation had been raised and now clarity on key matters was needed from the State.
“We need to know that providing sworn testimony to the commission will not place our evidence beyond reach of criminal proceedings, or cause it to be irreversibly sealed,” said Ms McMahon.
“In light of this, it would be imprudent to proceed with evidence to the commission until the situation is more clear.”


The group had contacted the office of the Attorney General on the matter and awaits a response.
Ms McMahon’s group represents more than 70 women, the majority of whom were coerced into giving up their babies for adoption after becoming pregnant and being sent to mother and baby homes.

Others were coerced during hidden pregnancies in other ways, including in family settings and psychiatric institutions.

Ms McMahon said many of the women who had applied to give testimony to the commission had never received “so much as an acknowledgment” of their application.

There was confusion about why giving evidence to the commission’s informal confidential mechanism, rather than the formal investigative committee, was the only option being offered to some women.
The lack of clarity, delays in processing applications and even the need to apply for the reimbursement of out of pocket expenses incurred when meeting with the commission’s investigative or confidential committees was undermining victims’ confidence in the system.
And while Irish First Mothers had helped prepare some women to give their testimony, they would now cease that work until the clarity they are seeking is forthcoming.
“Most of our members attending have only met the informal committee,” said Ms McMahon.
“And most of those remained entirely unaware that their testimony had been merely informal. They only discovered this after the fact, during our private mutual support discussions.
“They were not informed of the choice of formal or informal testimony – either before or at the conclusion of meeting the informal committee.
“If informed, they would have given sworn testimony.”
The commission was established in January 2015 and is chaired by Judge Yvonne Murphy.
It was set up to examine the deaths of babies that happened at 14 mother and baby homes and four county homes between 1922-1998.
The expected completion date is February 2018.