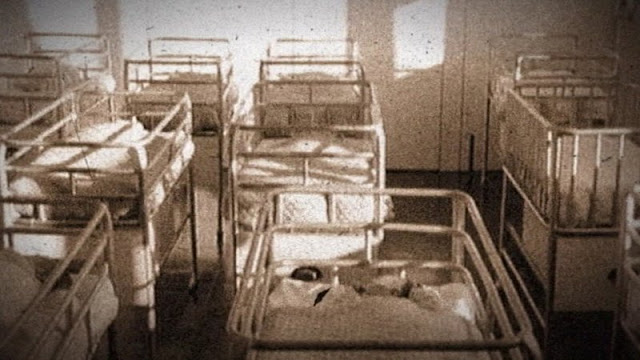 Uncovering The Cults' massacre of unwed Mothers and their Children must now be a top priority. Slowly, gently even, we must scrape away the dirt, raw sewage and the Cults lies of decades, from human bones, the remains of innocent women and their vulnerable children.

Tangled with the remains, are shreds of pain, rape, brutality, bruised clothes and the rotten mould of unnamed children’s leather shoes. The mass graves at all Religious run Institutions in Ireland, must be rediscovered, DNA'd and reburied in proper graves.

In many of these Religious run Institutions in Ireland we have to unearth the remains of more than 10,000 Children and Babies: the Rejects, dumped into these mass graves, at the back of Convents, Industrial Schools and Orphanages of Ireland.

Women and Children bodies were lying face down, many of the women, were covered in bandages from beatings and broken bones inflected on them when they were alive by the cruel Nuns, and were than liquidated. Then the Nuns, got others to dig ditches, for them, cesspools and reopened Septic Tanks to dispose or flush the rejects, the children and babies who they didn’t want to look after, because they the rejected children and babies were unsaleable.
The unwed Women and vulnerable Children massacre was not commemorated, not would it be. After all the Nuns did not want any reminders of their evil work, better to bury them in cesspools and septic tanks, unseen, unrecorded and out of sight.
So let’s start with Bessborough Mother and Baby Home in Cork - the burial place of well over 900 children who died in the care of Bessborough Mother and Baby Home is unknown. A Nun who worked for 40 years years in Bessborough Mother and Baby Home, claims she doesn't remember any child deaths - there were 671 children’s deaths during her time there;-

(This is Outrageous)- One Nun of the Congregation, The Congregation of the Sacred Hearts of Jesus and Mary who was in Bessborough for most of the period 1948 - 1998 told the Commission that—

“She did not remember any child deaths during her time there but she implied that the children who did die there were buried in the congregation burial ground.”

The Mother and Baby Home Commission of Investigation said;-

“The affidavit from the congregation that ran Bessborough Mother and Baby Home was “speculative, inaccurate and misleading”. 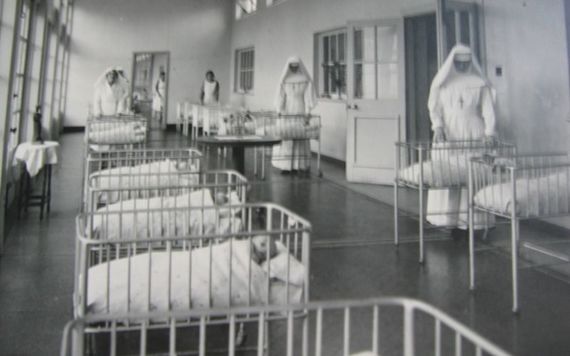 Here's what the commission found:-

More than 900 children died in Bessborough or in hospital after being transferred from Bessborough. Despite very extensive inquiries and searches, the Commission has been able to establish the burial place of only 64 children. The Congregation of the Sacred Hearts of Jesus and Mary who owned and ran Bessborough do not know where the other children are buried.”

But in my opinion the Commission is blind to the Nuns Crimes in Bessborough Mother and Baby Home. And even more Outrageous-

Of the 552 “illegitimate” children who died in Cork District Hospital/St Finbarr’s, (including 113 transferred from Bessborough Mother and Baby Home), the Commission has identified the burial place of only 5 children. Between 1922 and 1998, a combined total of 1,343 “illegitimate” children died; 771 died in Bessborough Mother and Baby Home, Cork;- 552 died in St Finbarr’s Hospital, Cork City and 20 subsequently died elsewhere. To date, the Commission has identified the burial places of just 64 children. “Despite having undertaken an intensive investigation the burial locations of 1,279 of these children remain unknown,” Commission of Investigation said;-

Ok let’s get real here, we need to take of the gloves here, Bessborough Mother and Baby Home in Cork needs to be treated as a Crime Scene, as does every Religious run Institution in Ireland, immediately. Better still all the Religious run Institutions in Ireland, need to be treated as War Crime Scenes and the war on unmarried women and their vulnerable Children by The Cult. This really was a war on both unwed mothers and their children, by The Cult that ran Ireland.

Ireland’s Grave breaches of the Geneva Conventions, such as:

These horrendous crimes where a part of a diabolical plan and policy of the Irish Catholic Church, The Cult. Which was carried out in all the Mother and Baby Homes, Industrial Schools and Orphanages in Ireland. All part of large-scale crimes of the Irish Catholic Church. For along with the many thousands of missing and dead children and babies, the Rejects of the Religious run Institutions. The Criminal Nuns according to the Commission of Investigation have conveniently lost, destroyed, reams of vanished records and documentations. The Commission of Investigation have said also that the Criminal Nuns were unwilling to help.
It would also help If more Irish media outlets focused as fastidiously on the Catholic Church's lies as I do, we might have avoided tens of thousands of more child rapes and deaths, altogether.
More Horrors-

More than 950 children’s bodies were sold for medical research to University College Dublin, Trinity and Royal College of Surgeons.
Galway County Council has said it was not aware that babies were informally and inappropriately buried at the Tuam Mother and Baby Home which it owned and maintained, yet there is ample evidence to the contrary. It has not explained why it would have no burial register for the children when it was legally obliged to keep such records.
The Bon Secour Sisters who ran Tuam Mother and Baby Home, have said;- That is has found the resources to hire their own Archaeologist to challenge the findings, in the words to lie for them, just like it did with the PR. Firm, run by Terri Prone who said after been paid by the Bon Secour Sisters who ran Tuam Mother and Baby Home, the 796 Babies in the Septic Tank were all Famine Children from the mid- 1840s..We now know this was and is a lie, perforated by The Bon Secour Sisters and Terri Prone, PR. Forensic Archaeology has conclusively proven that the 796babies were flushed in the Septic Tank from the 1930s to 1960.
A Mass Grave is a grave containing multiple human corpses, which may or may not be identified  prior to burial. The United Nations has defined a criminal mass grave as a burial site containing 3 or more victims. It is now a known fact that all the Religious run Institutions in Ireland have Mass Graves of  thousands of women and children. 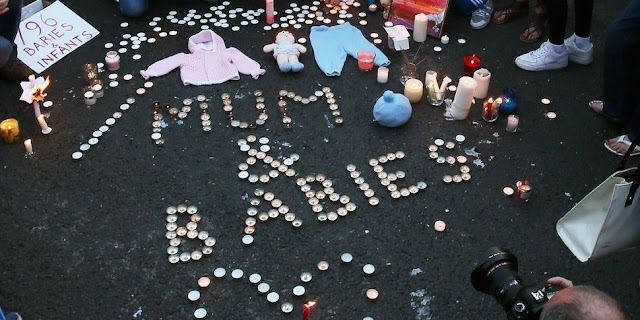 " in many respects, speculative, inaccurate and misleading"

This horror of mass graves of children and babies only underlines how little we know about our true Irish history. The death of tens of thousands of unmarried women and their children in the Religious run Institutions of Ireland is a catastrophic loss and suffering under the occupation of The Cult, the Irish Catholic Church. We must never forget about the dead of innocent women and their children. We must never allow the hushed up by The Cult, the Clerics and their enablers. Please!! we don’t need more memorials dedicated to nameless children. A better memorial would be the need for true and honest accountability. The children and babies were killed or allowed to die because they were REJECTS, plain and simple.

Countless mass graves are still secreted away across Ireland. Excavation work, should only stop once all the remains of the children and babies have been recovered. I have heard young people in their teens flippantly say- "I don't think anyone our age really knows what happened." In which I reply, I’m a Survivor of 18 years in these Religious run Institutions of Ireland and I do remember, as do tens of thousands of other Survivors, the walking wounded. Please remember this-

History becomes harder to ignore, with every fragment of a Child, a Baby, a Woman recovered from the Septic Tanks, the Cesspools and Mass Graves of the Religious run Institutions of Ireland.